I just tried to move Fenley inside from sleeping in her car seat. I failed… She woke up. Used to that would have exhausted me. Like…I need you to nap, child. And this time I just really felt The Lord say sit down and soak this up. So I laid her on the couch and I sat with her. Scratching her arm and looking at our nativity on the mantle with our four stockings hanging underneath.

And the most beautiful reality consumed me…
I really have the sweetest daughter here. She gives me the sweetest moments.
My handsome husband is really on his way home from the deer camp. The husband who gives me butterflies still. The husband that his company makes me jealous of the deer camp.
I really have a son in Heaven. He sees God’s throne room. He knows what Heavenly storehouses of snow look like. He doesn’t know sorrow about missing me…just excitement to see his mama again one day.
I really have a Savior that died on a cross so I can know his Father.
And Jesus’ Father… He really adores me. He really chose me for Wills and Fenley. He really made me, on purpose. He really meets me here and fills my heart with Himself.
I really have a home that I love that is filled with so many happy and beautifully heartaching memories.
I am really walking out a story that I thought would take me out emotionally and instead it’s the one thing God has used to sober me out of my excessive stuper and help me feel real emotions for the first time.
Leads me to think of a story God has richly used for us from Daniel 3. The 3 Israelite friends that won’t bow to the king…are then thrown into the fire and a 4th man shows up in the fire (Hello Jesus!!) And they just walk around in the fire. They are then pulled from the fire and…
“Then the high officers, officials, governors, and advisers crowded around them and saw that the fire had not touched them. Not a hair on their heads was singed, and their clothing was not scorched. They didn’t even smell of smoke!” (verse 27)
They didn’t smell like smoke 🙂 during the early weeks of Wills’ diagnosis I was terrified that this chapter would wound me in a way that I could not recover from, mentally and emotionally. That I would be a child of God that reeks of heartbreak…that people could smell me coming a mile away with my very own personal cloud of gloom. God oh so gently led me to this story.
They didn’t bow to the king of their day. I refused and still refuse daily to bow to the fear that tells me this is impossible to recover from. I refuse to believe that it’s impossible to walk through this and not smell of smoke… I want to be known not for how this earth and it’s diseases drained me of my joy. But rather how God tended to me on this earth in the midst of disease and in my heartache and say… He is marvelous and I’m smitten with Him. Because of the fire, I deeply know His goodness like never before. Just like the 3 friends in the fire. I know they loved God before but now they had seen Him firsthand. They were rescued from their fire. And so was Wills, who has seen the greatest miracle…death came, Jesus intervened and now Wills is spending his first Christmas with the Prince of Peace. And I now have a hole in my heart that is shaped like my baby boy. To miss something this much means I loved him that much more 🙂 sweet grief.
God prompted me to make a list. Of people that I knew had been through heartache in this life but didn’t smell like smoke. It was a short list to start with but it’s growing 🙂 He is introducing me to people who really see Him in their question marks. And let Him answer those questions. Even when His answer is just His presence. Isn’t that all we need anyway? Him? When He gives an answer, hallelujah! But when He gives Himself…wow. What a privilege to get Him as the answer to your questions.
This life…many questions, one Answer.
Side note…2 people on my “no smell of smoke” list.
A Godly woman who lost her hearing in her 30s, now brutally dying of cancer and on hospice but still only has the sweetest joy for God and how good He has been to her. You can’t trick her into poor mouthing.
A dear friend who has two special babies in Heaven. She had a quiet c section room…which was my greatest fear. And she is the one I constantly needily (is that a word?!) text about how she has the SWEETEST grief.
Like I said…the list is growing and I’m thankful to meet others who don’t smell like smoke 🙂 only God can keep you from smelling like smoke after the fire. His presence is the cure. Praying He protects me from the doubt and fear and anger that try to sneak in.
A marvelous side note on this perfect Christmasy day…
My ornament of my two babies. This ornament was the last one left at the store. It already had two other names on it. I asked if they could get the other names off and they said no. I said, could you try? She said yes. I said a prayer. She came back. Said the marker had never come off like that before 🙂 I said, with tears, it’s because I prayed and then got to share our story. Then the guy ringing me up recognized Wills’ name and shared that he knew our story and wouldn’t let me pay for it. Glory! 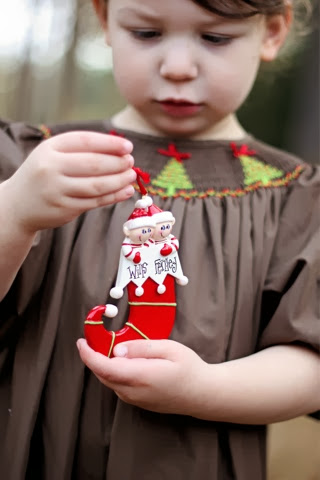